A Not-Random At All Public Apology to Black Center Tactical 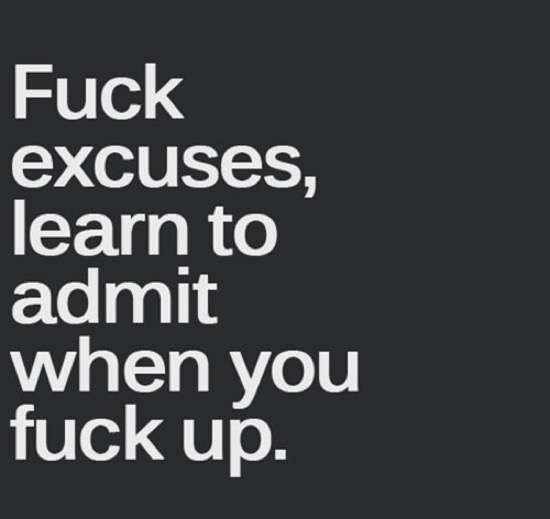 I recently fucked up. Seriously. Not an unusual event in my life, but here’s the backstory offered as context — not as an excuse.

This blog attracts an eclectic demographic: international best selling authors to world-class cognitive neuroscientists to quiet armed professionals from many countries to (reportedly) some higher-end bad people as well. There’s significant representation from those in the profession of arms — both military and law enforcement — out protecting us from the bad people, and many many world-class trainers (as well as those who aspire to be). There are a lot of Americans who exercise their 2d Amendment rights, as well as international folks who for various reasons carry and conceal weapons. And I get much broader play than even I suspect sometimes – just this past week I was honored (and greatly surprised) by the deeply respected Ol’ Remus of THE WOODPILE REPORT with his inclusion of my random thoughts here: http://www.woodpilereport.com

While I’m just an old researcher and writer these days, I did spend a few years going in harm’s way with the requirement to carry and conceal various types of weapons. I count amongst the people I was fortunate enough to have equip me my late friend Bruce Nelson, Milt Sparks (Tony Kanaly’s first holster build after he was hired at Milt Sparks was a classic Summer Special for me, to house one of the first Sig P-220 Americans, as the magazine release version of the European Sig was called), Andy Arratoonian, Ken Null, Greg Kramer, and so on. If you don’t know who those people are or were, you’re either young, not in the biz, or don’t care about the history of concealed carry. That’s all cool. Stick around and hit the links below.

Back in the day (80s through early 2000s) you could find my byline or pen name in COMBAT HANDGUNS, SWAT, GUNS AND WEAPONS FOR LAW ENFORCEMENT, and some of the other various gun rags. While my area of expertise was training and training research, I did gear reviews as well. At one point (in the 90s) I was probably one of the most prolific gear review editors in travel, outdoor, and the tacti-cool community – focused on hard and soft goods EXCEPT actual guns.

I’ve been (many times) in the last 30 or so years asked (either formally under contract or informally as a favor to friends) to advise on gear selection for various units and individuals. This ranges from pointing procurement officials at little known niche makers to doing my independent evaluation of name gear, and in some instances just purchasing (with Other People’s Money!!) X in X quantity for X people.

Like a Ronin S-4 (because I may ambush you with a cup of coffee if you piss me off), I run a heck of a supply room when I get going.

I recently had a discussion with a friend of mine who works at a high level in the counter-terror business. He works in plain clothes and while conversant in the latest and greatest, often humors this old man by asking my opinion about various things.

My friend in deep cover, in a Non-Permissive Environment, armed with a locally procured knife

What he asked: “If you were equipping men who must work in plain clothes in a hot and non-permissive environment, who would you recommend they look at for deep concealment holsters and pouches?”

My answer: “I’d tell them Black Center Tactical for the IWB rig he makes, but with the addition of an extra-long Incog strut. Clean, simple and to the point. Elegant design, just what you need and nothing more. You don’t have to be an engineer to figure out how to put it on and adjust it. Easy on and off, in case you have to ditch or stow the weapons and holsters. Excellent retention and quite suitable for deep concealment.”

He said: “I thought you didn’t like their gear?”

I said: “What? Only stuff I’d use, were I the type to carry weapons.”

I went and looked and just about had my fifth heart attack, or my second stroke, or my second near-death-experience. I had, in fact, said in print that I wasn’t really impressed by the BCT IWB rig.

I’m going in and put a correction to link to this post, so it won’t be there by the time you look.  If you must look, search for Random Thoughts On Cool Guy Gun Gear.

Here’s the truth with no excuses: I must have in some way mixed up my notes from the project I was working because what I wrote WAS NOT my experience (or that of my testers) with the Black Center Tactical rig. In point of fact, our experience(s) were THE EXACT OPPOSITE of what I wrote.

I could go into a long rambling excuse about old age, decrepit cognitive function, short term memory loss, carelessness with notes and in being in too much of a hurry to get something done.

But I’m not going to add insult to injury.

I apologize to Black Center Tactical and the owner John Bonnett publicly for my mistake. I screwed up. That’s all there is to it.

My personal choice in a rig: Black Center Tactical (it has replaced PHLster in my ranking for #1 in concealment Kydex).

My recommendation to elite operators who go in harm’s way? Black Center Tactical.

My recommendation to anyone looking for extremely high quality custom kydex work with a REASONABLE wait time (2-4 weeks) and REASONABLE prices for that work? Black Center Tactical.

My friend the Invisible Man has occasion to be armed in high-risk environments. Here is he is, off duty: 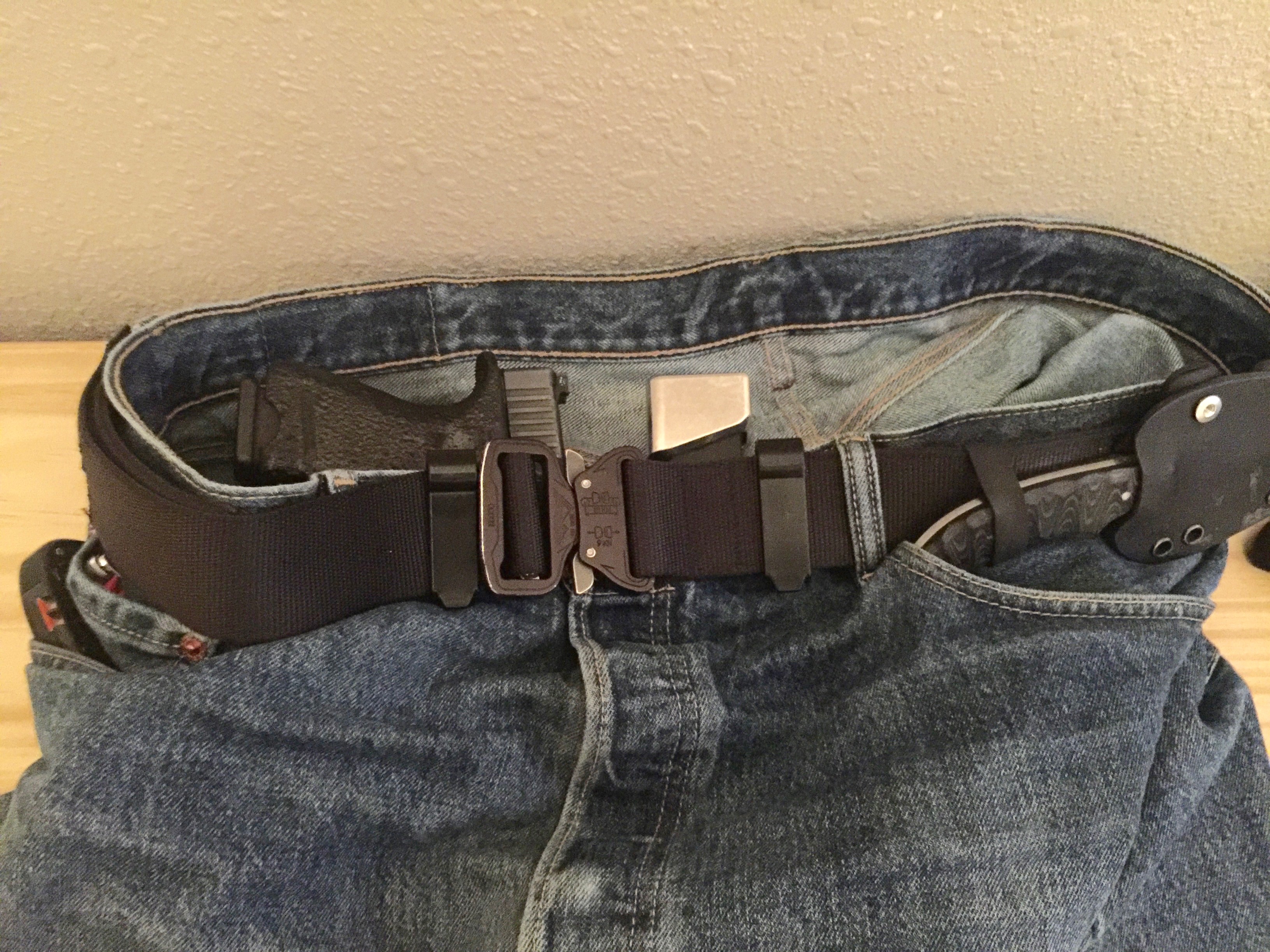 a. He can hide ALL that gear under a light T-shirt at close quarters with people (and does so, regularly)

b. With his experience and skill set he can get that Karl Sokol http://www.chestnutmountainsports.com customized G-19 (grip reduction, beavertail, trigger job, innards polished, Trijicon HD sights, and the black stuff on the handle – truck bed liner. Don’t laugh, youngsters…works great when wet, much cheaper than other fancy finishes and you can touch it up yourself if needed with a $5 can from the local auto store) out of the holster and on to work with a clean Mozambique (at 10 yards instead of 7) from deep concealment in an average 2.0 seconds, though he has been known to go faster when frightened. 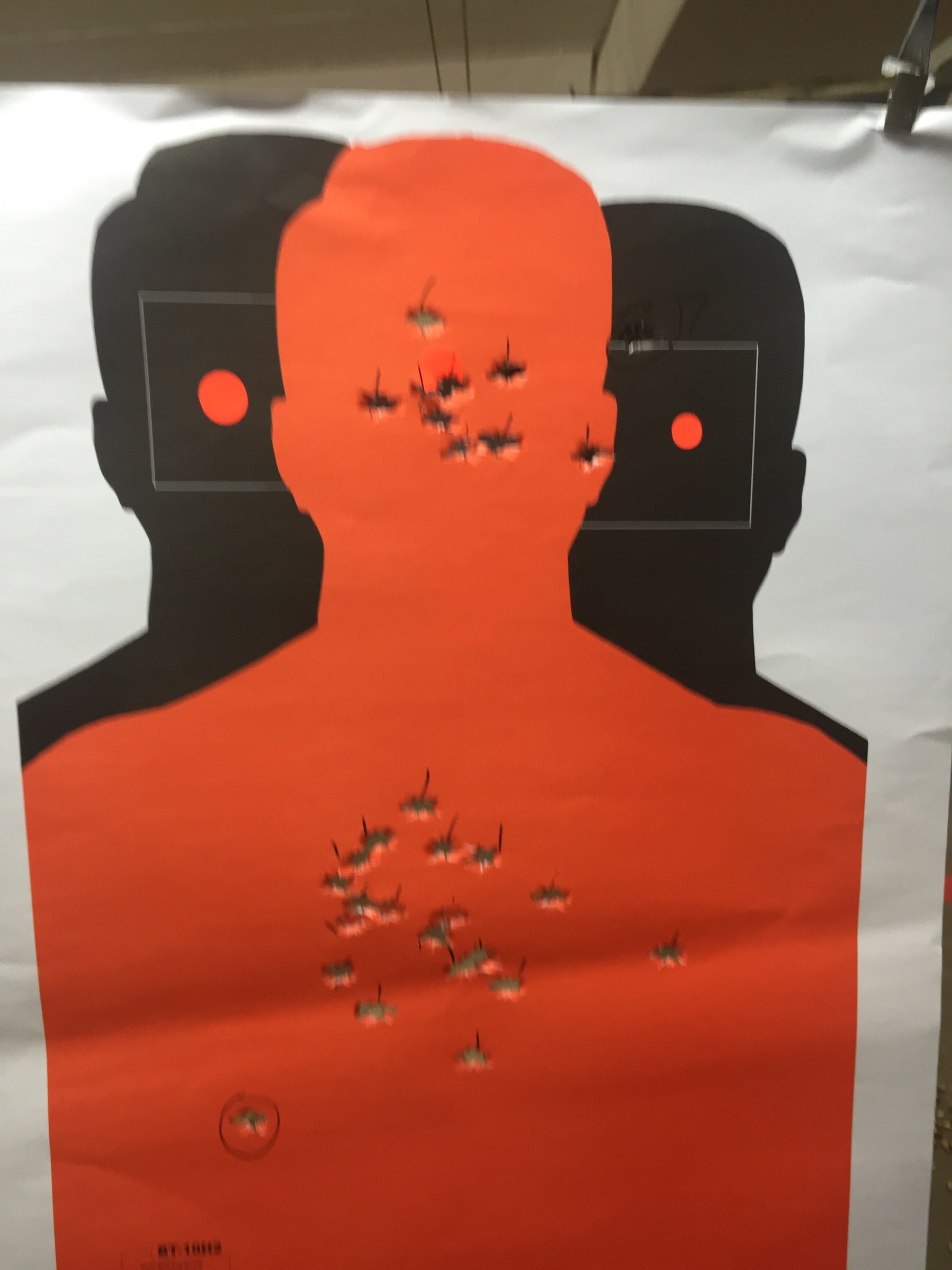 So back to the line up:

• Similarly modded mag pouch (Incog long strut) which contains a Dawson Precision +5 baseplate https://dawsonprecision.com/basepad-hicap-for-glock-extended-tool-less-design-by-dawson-precision/and spring on a Glock 17-rd magazine. This gives his back up magazine 22 rounds. So with 16 rounds in his G19 his daily EDC is at minimum 38 rounds of 9mm. He can pop an identical magazine and pouch rig right next to that one. Extensive testing of this magazine extension set up leaves him confident enough to run it daily. The Dawson baseplate includes a special spring as well as a baseplate which keeps it extremely reliable.

• A Boker Trigonaut http://www.amazon.ca/Boker-02BO280-Plus-Trigonaut-Knife/dp/B0037EZ0TC worn horizontally, rig modded with Raven Concealment 1.75 inch belt loops, and a Ranger Band www.gearward.com as an extra retention device should one find oneself engaging in fisticuffs with miscreants. Extremely fast access with either hand, the Ranger band protects it during scuffles or being brushed out of the sheath at close quarters by accident. The Trigon is much less expensive than a lot of the fancier knives, is a legal length in many jurisdictions (check your own local laws if you decide to emulate) and a fine working tool for EDC carry.

NOTE TO THE KNIFE PEOPLE: While my friend carries this knife as a daily work tool, if one were so unfortunate as to have to resort to it as a defensive means, it’s inexpensive enough where you won’t miss it (much) when it goes into evidence in the property room. Or in the river. Unlike some of the more expensive albeit nice custom knives built for the whole “mid-line access” role. YMMV.

Here’s a pic of the rig on the Invisible Man when he turned off his invisibility cloak:

Oh, and the Invisible Man assures me that the Black Center Rig is absolutely invisible — under a burqua. 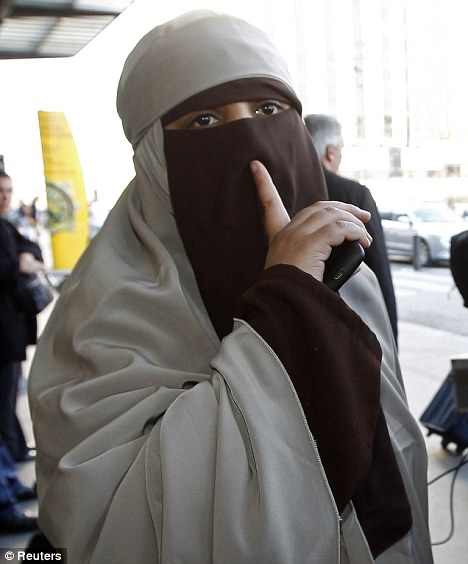 Buy some rigs from Mr. John Bonnett and tell him I sent you. With my apologies.

The Invisible Man at work…..(wink)

← Prev: Random Thoughts on Crowds and Attacks Next: Marcus Goes To DARPA -- Again... →