Cognitive Dissonance: Billionaires, Survivalism, and Living In Your Car

I’ve been camping and living out of my car for the last five weeks on a cross-country drive-a-bout while business things percolate. I’m currently hanging in Sun Valley, the site of the Allen Conference, the annual “Billionaire’s Summer Camp” for tech, media, entertainment and financial moguls to bike, hike, sun, take in presentations from folks like former CIA Director Petreous, and strike deals over tables in coffee shops.

I find the conversations fascinating. It’s considered poor form to start off discussions with business immediately; a certain amount of conversation to establish rapport and relationship is mandatory. You know what I hear and get asked about? Guns, shooting, physical fitness, health, mental training, survival and preparedness.

Is that what you expect billionaires to ask about?

It could be that’s because some of those things fall into my skills spectrum, but the amount of serious personal and professional interest on those subjects surprised me. Maybe the threat assessments, briefings and predictions offered up behind the closed doors of the Allen Conference prompt the wealthiest and most influential individuals on the planet to consider things like escaping the planet on your private spacecraft, or buying a mountain and hollowing it out, or an island in a remote location with your private maritime security force comprised of former DEVGRU operators.

In a VUCA world, a certain amount of attention to preparedness for black swans is logical. And maybe we mere mortals might take a cue from the elite’s intense interest in surviving “The Event.”  I tell those who ask you can’t buy a seat on my escape spacecraft; they’re all reserved for the good of heart and those who go in harm’s way on behalf of others. As the amazing Norwegian singer AURORA says, “You cannot eat money…”

My friend Mark curates the excellent blog PRACTICAL ESCHATOLOGY. Every Wednesday he does an aggregation which he calls THE DOCENT’S MEMO. In today’s round-up I noticed an article on living in your car.

As I mentioned I’ve been living in my car for five weeks. I’ve had several rough patches in my life that involved me living in my car or a rental car for extended periods of time. (NOTE: renting a car monthly is not too far off from paying monthly rent in an apartment, however in a rental car you have mobility to go to where the work is, as long as you keep paying the monthly rental fees.) I’m a multi-tasker and I always do multiple things simultaneously. While my primary purposes on this trip are recreation, renewing distant friendships, cultivating patience while business people do their things, and spiritual discovery, I also look on it as an opportunity to assess the baseline state of my survival/travel skills and my ability to maintain mobility under semi-austere conditions. Among other things I’ve driven across the Continental Divide on a rock and dirt fire-path (won’t call it a road), spent days without any other humans around in the Wind River Range, parts of the Rockies and in the National Forests, cooked well, slept well, and renewed my skill set. I also learned some humility about the physical limitations a 65 year old partially paralyzed stroke/heart attack/cancer survivor has to deal with, LOL.

Getting old is not for the weak. 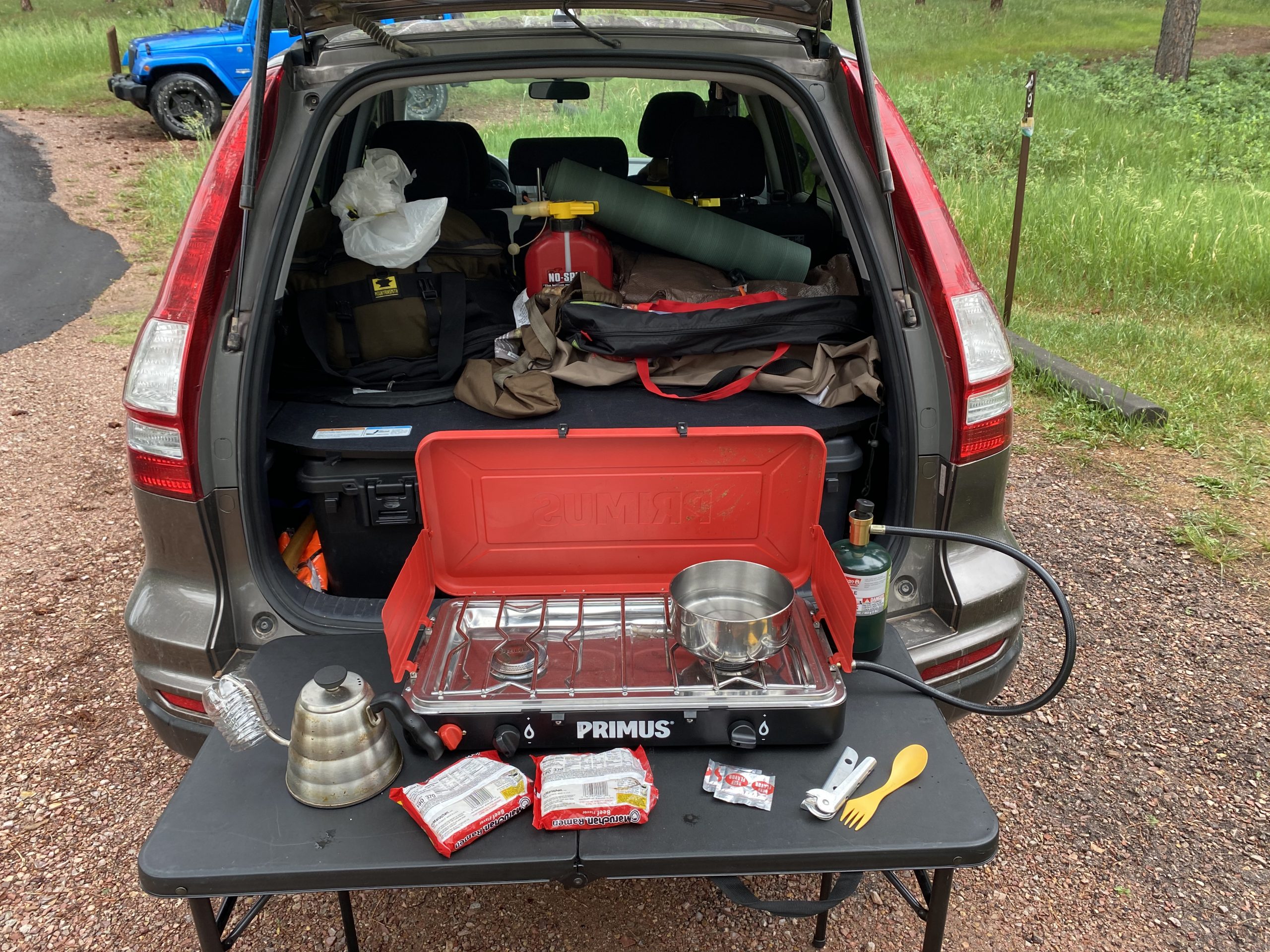 Meet Mindy (like MORK AND MINDY) my beloved and faithful steed. An 11-year-old 4WD Honda CRV with 190,000 miles on her. Drove over the Continental Divide where ATVs feared to go just fine. Keep your vehicle tuned up, make your oil changes and tire rotations on time, check your fluids and your tires. Modern cars will run a lot longer than people think, and in tougher circumstances than you usually encounter. Know how to do things like change your tire, check your oil and fluids, patch/plug a tire. Buy the service manual for your car and keep it with your tools in the car.

While Mindy runs great thanks to regular and excellent service from a master mechanic, I do my bit in keeping fluids checked (she drinks a bit of oil and tranny fluid because of the hills and off-road we’ve been doing), check the tires and so on. The only self-repair on the vehicle I’ve had to do was take the wheels off and scrape fresh road tar with embedded gravel out of the suspension and shocks after a long drive on freshly tarred roads. A horse-woman came upon me and asked what happened. I explained that so much hot tar and gravel got up into the springs and coils that it was scraping and affecting the ride, so I had to take the tires off to get at the suspension and scrape all the tar and gravel out. She opined that would cost $300-$500, maybe more, at her dealership. I agreed, probably more, and not much use if you’re far from a repair shop and it is something easily done by the owner — if the owner educates themselves about simple and basic things. 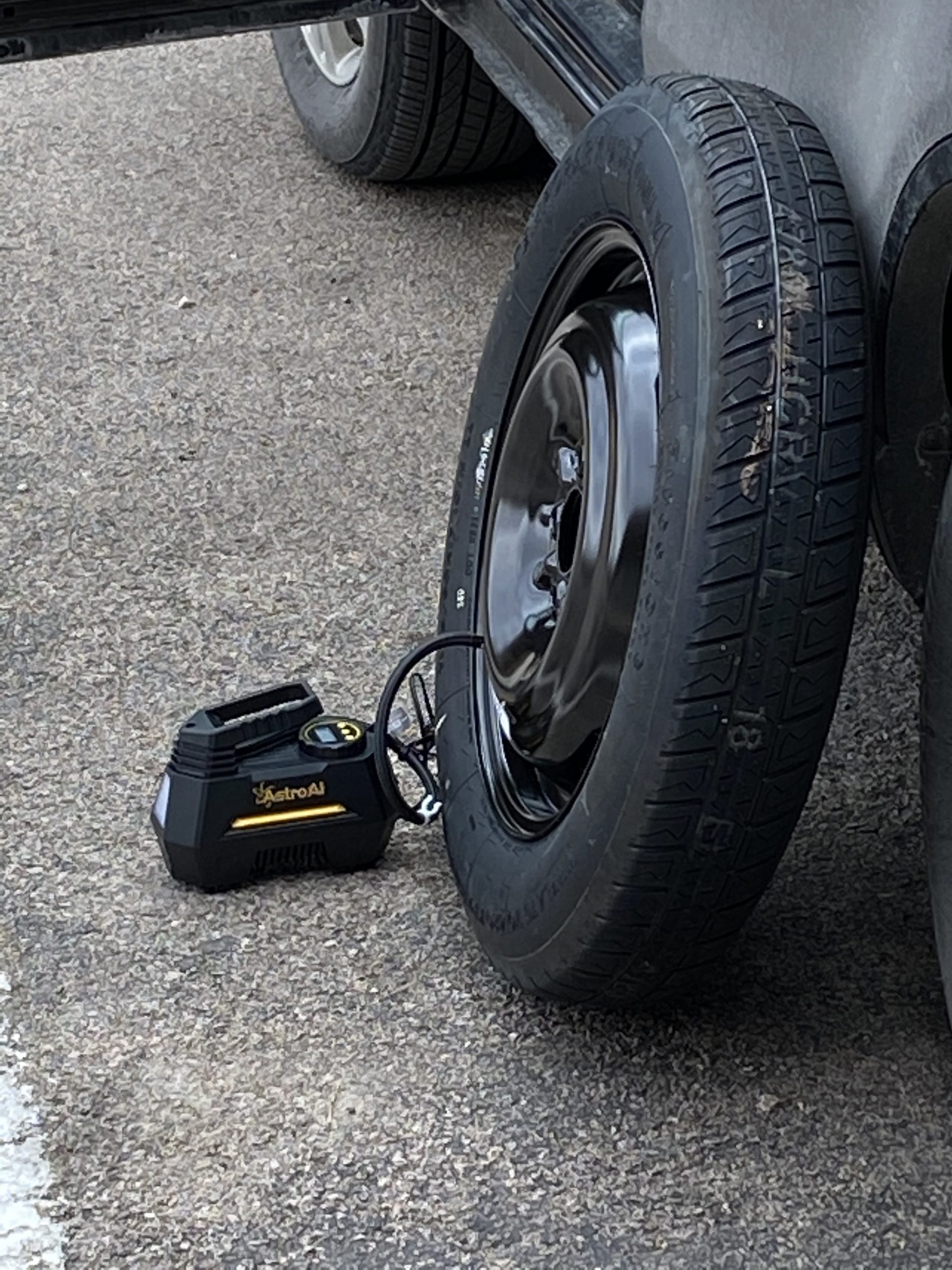 2. My personal priorities for living in/out of a car, after absolute reliability and service of the vehicle first, are sleeping well, eating well, and being safe while doing so.

3. Sleeping well. I have a full size tent, which contains a military style cot, with several layers of padding and insulation, along with a sleeping bag, wool blanket, and my favorite pillow. When I set up the tent, I’m in seriously luxurious sleeping circumstances. 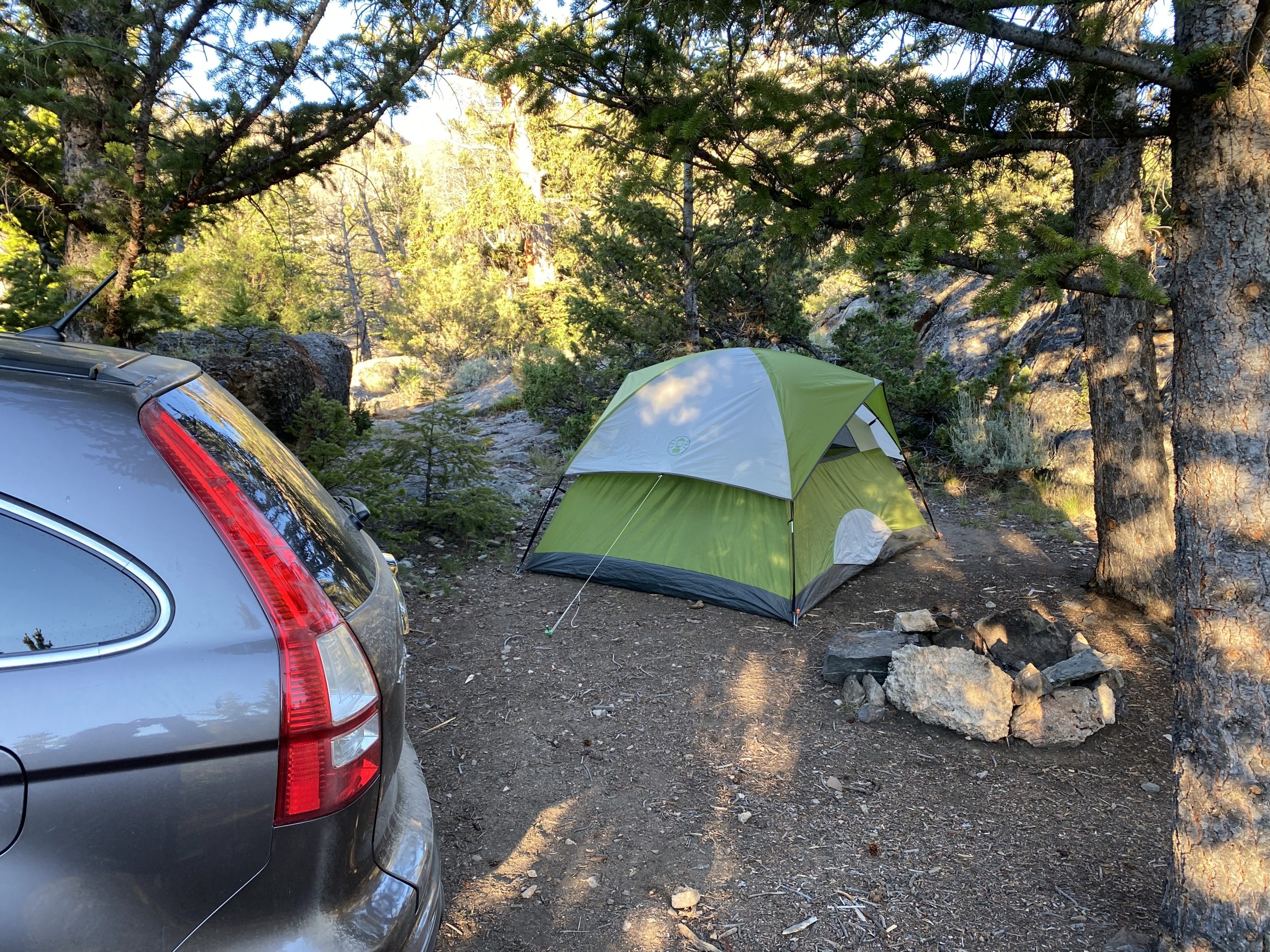 Above is deep back country, Wind River Range. Splendid isolation, no people for days.

My array of sleeping gear covers me from crashing in a reclined seat (pillow, wool blanket) to tenting as above to improvised hasty shelters in the deep back woods when I don’t want to mess about with tent set up. 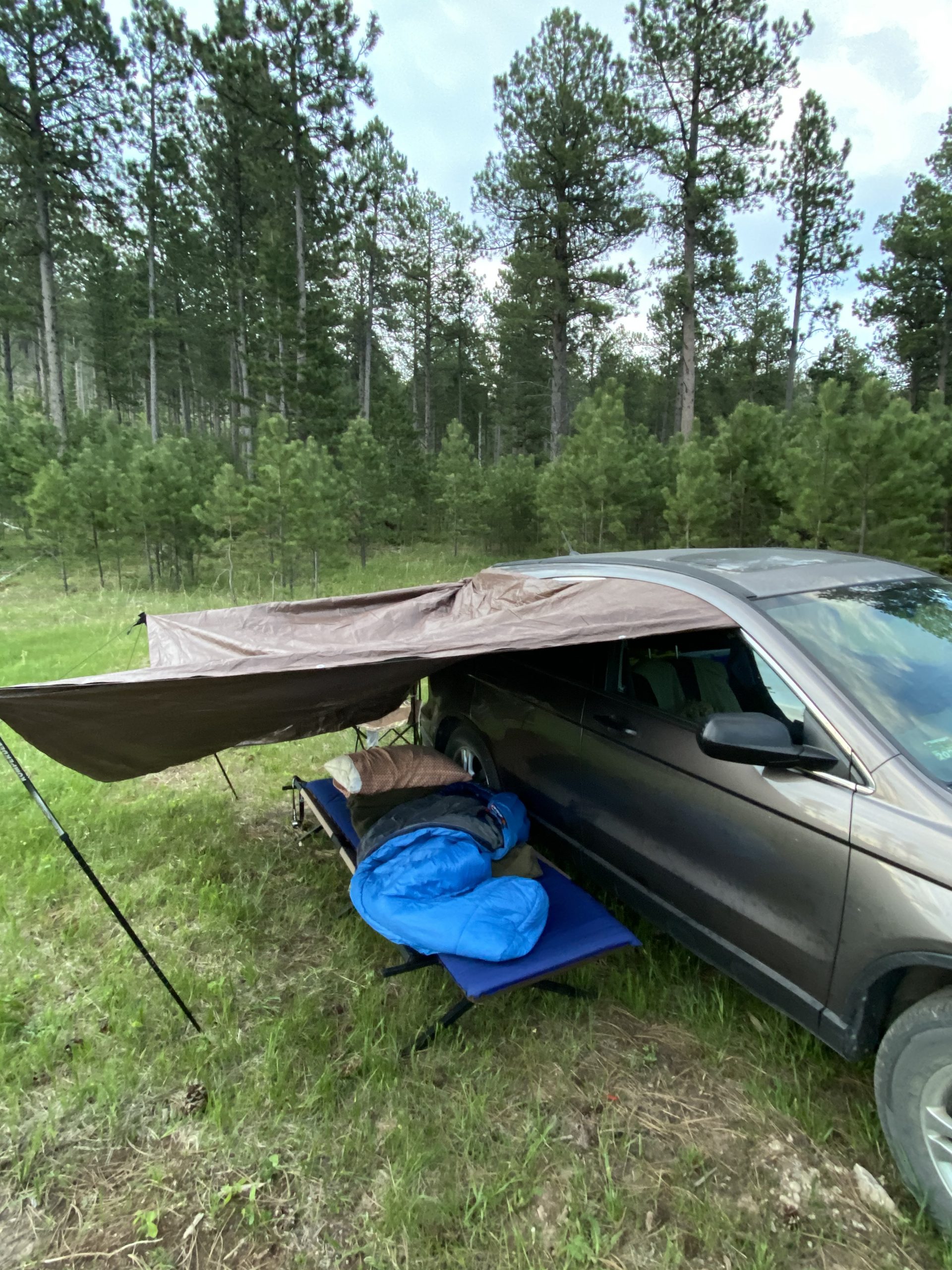 Deep in the National Forest. A mountain lion came within 25 yards that night. I found the prints the next morning.

4. Eating well. Many people approach camping as a time out from good eating or conscious eating. That’s fine for a weekend or 3-day trip. Poor or sketchy nutrition takes it’s toll after a week or two. This assumes you’re not spending money on roadside diners or take out along the way. You can, on road trips, eat quite well out of grocery stores buying things like a roast chicken, or some cooked salmon/steak out of the deli section, some fresh fruit or produce, but if you’re out in the Deep Back Serious In The Weeds, you’ll need to be more conscious of food selection and preparation. One of the things I rediscovered is the essential weakness of coolers — even the high end ones — is they are based on the presupposition of ice availability and limited duration. I dealt with this on long road trips with my son when keeping his insulin supply cool/cold. While high quality 12v fridge/freezers are and remain expensive (ARB, ENGEL, DOMETIC) the Chinese manufactured copies are significantly cheaper and the constant evolution in power management technology for the small boxes make running a small fridge doable without having to install a separate battery box, etc. I haven’t bought one yet, but I’m researching them as a way to extend fresh food life beyond the day or two or three that coolers provide. Eating nothing but processed or prepared packaged foods for a week or two will take its toll on your electrolytes, gut flora and energy levels. Careful selection of quality foods, introducing fresh foods especially roughage (and yes, foraging can work if you know what you’re doing) and especially food preparation means you can sustain your health — the single most important thing in travel of any kind — and your pocketbook, which is always a concern in our uncertain financial times. 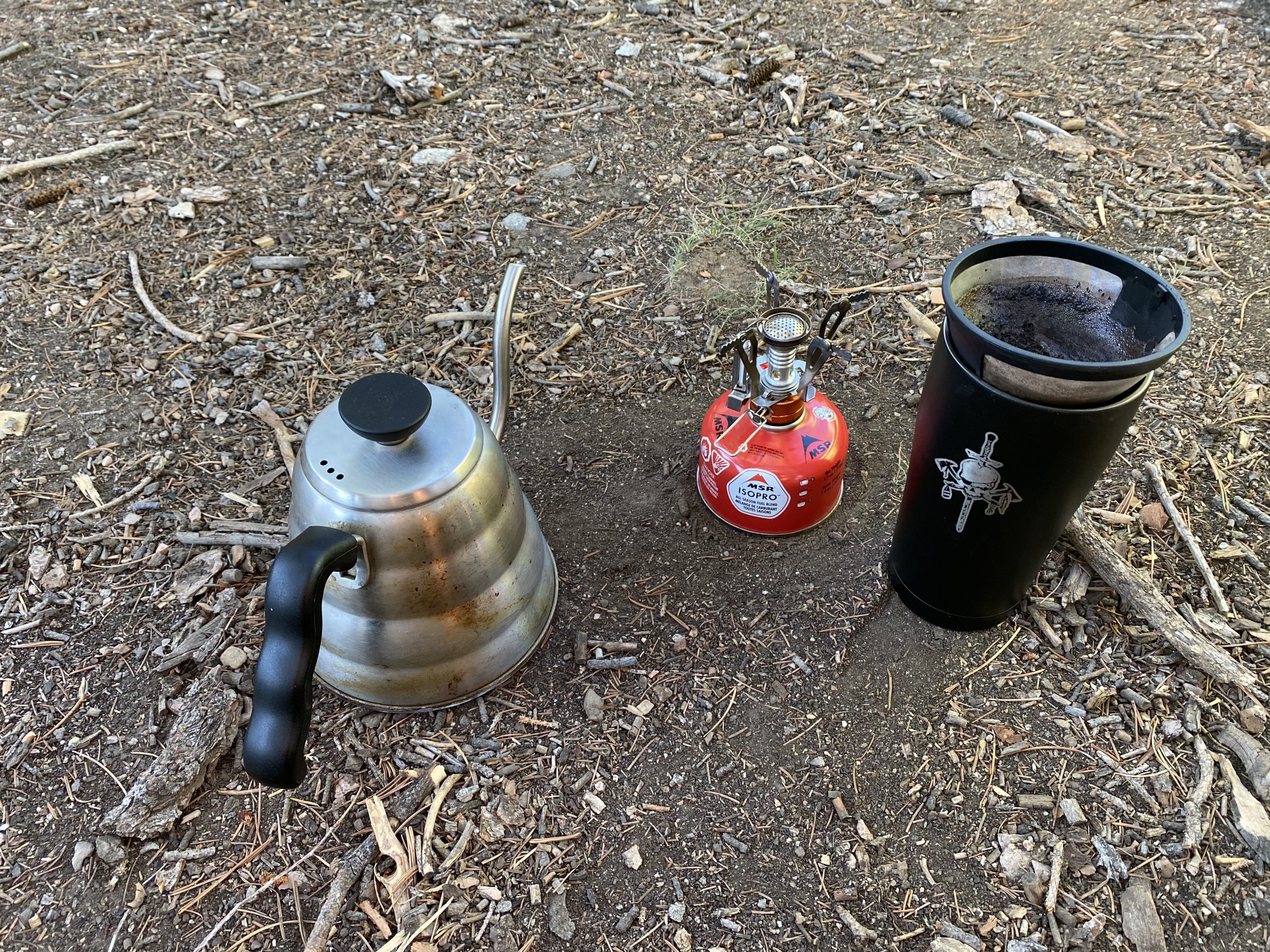 Hasty cook and coffee kit is a pot for hot water and a small canister stove with thermal cup.

Full cooking array is propane based two burner system, with pots, cutting board, knives. The two burner set up is a luxury and allows for a wider array of cooking options (cook your rice separately while you sauté onions, garlic, potatoes and some pre-cooked lentils for home made dahl baht). The Wal-Mart folding table I appropriated from my son, who used it for his gaming monitor, is awesome for cooking tailgate style.

5. Safety/Security. I don’t worry much about animals. I’ve been out in grizzly and mountain lion country, had some great spottings of wild life along the way. 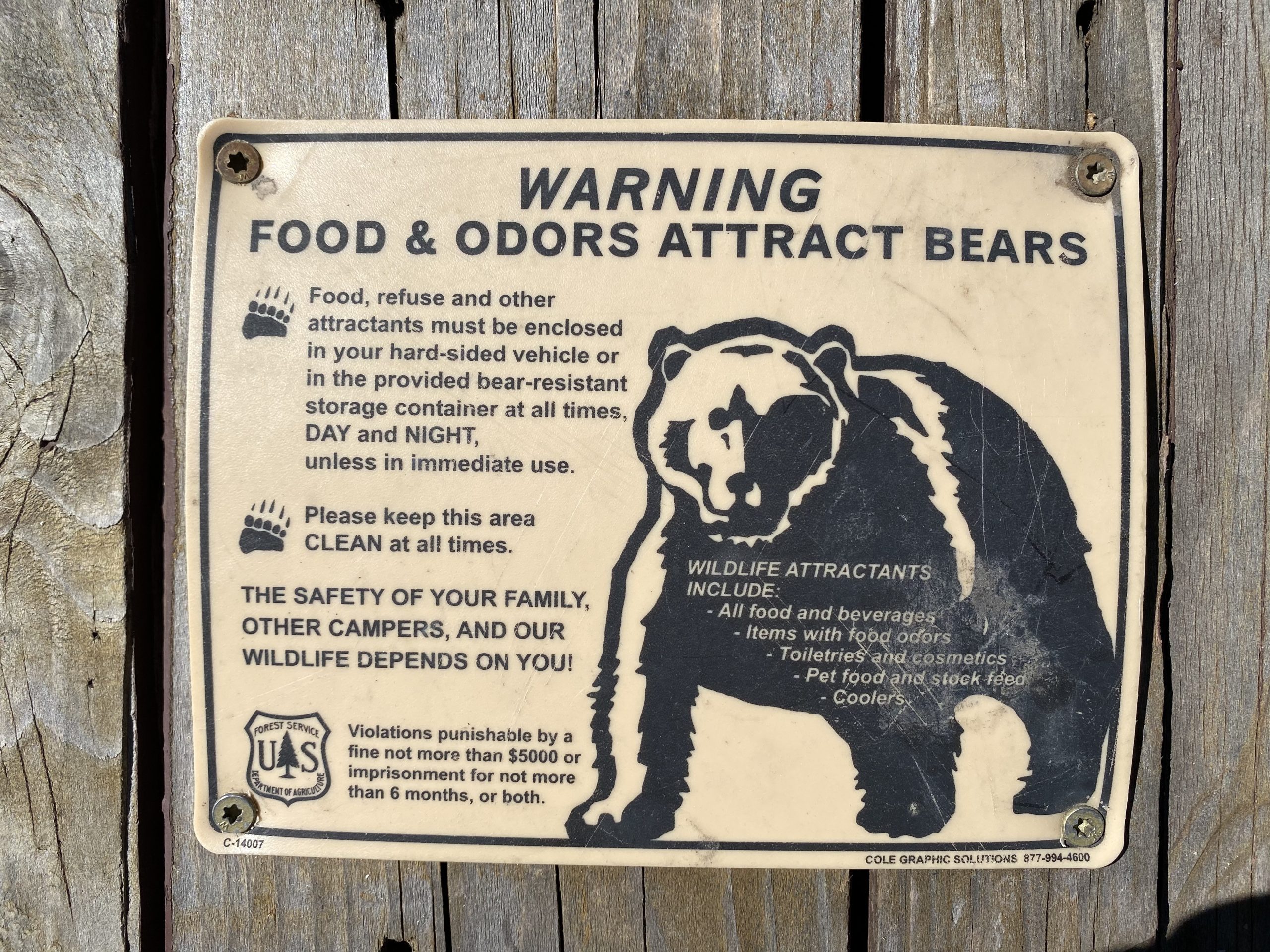 If you educate yourself on animal behavior and keep a clean camp, you’re extremely unlikely to have problems. If you’re an idiot like the woman last year who thought she could jump on a bison and expected it to hold still for her selfie, expect to die like she did: stomped and gored in front of her family and friends.

Humans worry me more than other animals.

Basic precautions: when traveling, understand that rest stops, truck stops, wayside rests are watering holes where everybody goes and predators stake out. If you’re making a quick pit stop during the day, scan around as you park, keep your car locked up and your bathroom visit brief. Official state roadside rests often have cameras, wi-fi, and sometimes helpful attendants. If there are no or few vehicles, be cautious entering the restrooms. I like to open the door, pause for a second, then enter and scan deep while holding the door open to facilitate a hasty exit. A pocket flashlight is very handy whether night or day; many toilet facilities are unlighted or have motion detection light activation that often malfunctions.

When sleeping inside your car, keep your windows cracked only enough to allow for fresh air, and not enough for someone to insert their hand/arm inside. It also allows for hearing to maintain situational awareness if you are reclined and below the plane of sight within your car.

When in doubt, start your car and drive away, especially late at night in isolated rest stops or roadside rests.

If camping in isolated or dispersed areas, same thing applies. Keep the protection tool of choice handy, read situations/encounters well, pay attention to those who pay too much attention to you, what you’re doing, what you’ve got, and how long you’re gonna be there…and then vanish. Those folks sometimes come back late at night to “check on you.”

This is getting overlong, so I’ll continue tomorrow or another day on things like the gear I used the most and some other random insights.

← Prev: How Super Heroes Get Their Minds Right Next: Living In Your Car, Part Two (Hill People Gear and Spyderco Love, Too) Rev. 1.0 →