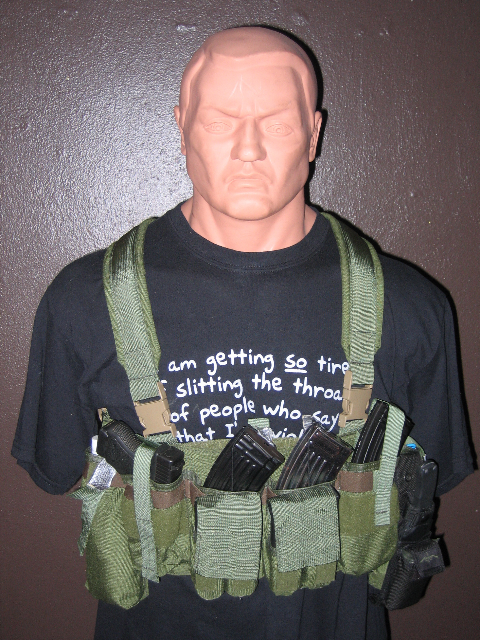 This is my friend Tacti-Cool Bob. Depending on the day of the week, TC Bob is either preparing for the Zombie Apocalypse, the End of the Mayan Calendar, The Second Coming, Economic Collapse, The New American Dictatorship, Alien Invasion or just another day at the range.

TC Bob likes to shoot. He recently had the chance to evaluate the Eagle Industries Universal Chest Rig as designed by Paul Howe. So why this rig, Bob? Bob was looking for a compact, lightweight, easy to mount rig that would keep everything in one compact bundle…everything he might need to muster an armed response with. He’d experimented with the whole active shooter go-bag concept, and found that while it was great for a few mags and a med kit, some of the other items he considered necessary weren’t easily carried…and that a shoulder bag, as quick as it is to sling, has a disturbing tendency to bounce around when he had to move in some kinda tactical fashion, whatever that means. So he looked into a chest rig. He’d had the opportunity to see a prototype of this and listen to Paul Howe, a hugely experienced warrior, explain his design rationale. So TC Bob got one and checked it out. In the pic, you’ll see his rig. From left on the pic to right: in the radio pouch he carries a water bottle and some power bars. In the pouch beside that, his handy Glock 30 (will easily fit a G-19; if you’re running a full size G-21 or Colt-type .45, it will fit in the radio pouch quite well, even with a light). The two middle pouches have a mag pouch, and then two pistol mag pouches mounted on the front. This pic has AK-47 mags in pouches, the first pistol pouches have a G2 Surefire and a Leatherman SuperTool; the second pistol pouches have G-21 magazines. One more rifle mag pouch, and then the other radio pouch has mounted on the front an Emerson PUK (not because the knife is a favorite, but because it has, of the blades I have on hand, the best sheath for mounting right there); a roll-up blow-out kit (first aid kit) rides in the radio pouch main body. The rifle mag pouches will take two M-4/AR-15 mags, or one AK or FAL magazine, which makes this rig a nice one if you run multiple long gun platforms. The pistol mag pouches are sized for double stack mags like G-17/19/30, but you could get two single column .45 mags in each one. Might lose the second one in a pouch on a speed reload, though. In the unlikely event he needs to run more magazines, the entire back of the rig opens up and can easily accept three more rifle magazines and a slew of pistol magazines; there’s an additional open pocket on the back for maps and chewing tobacco. What TC Bob likes about this is all of his “armed emergency” gear is on one rig that can be tossed on just as quickly as a shoulder bag, but stays with the body while moving much better. Grab rig, throw on. Grab rifle. Good to go. Favorite points:
1. Extremely simple and streamlined. All a civilian and most non-SWAT LEOS or security professionals will every likely need in even the most full blown armed crisis.
2. Cheap! You can find the rig as configured for as low as $65 if you shop around. Very hard to find a rig with the pouches set up like this for under $100.
3. Extremely well made.
4. Meets all the requirements of a “go-rig” (in Bob’s humble opinion).
5. Suitable for multiple long-gun platforms (5.56, 7.62×39, 7.62 Nato) Thanks, Bob! Misc notes: SKD Tactical has a near identical version, except they take the radio pouches off and replace it with MOLLE so you can strap on your own pouches. Google “Eagle Universal Chest Rig” for multiple suppliers…kinda hard to find right now, but worth looking for.
← Prev: Random Tips for the Street Next: You can't make this stuff up →