My friend Master At Arms James Keating recently dropped this video promoting one of his many books. This particular book is a compilation of his many stories gathered during a life long exploration in anomalous cognition, often referred to as parapsychology — the world of the X-files, psychic warfare, and the intersection of ancient indigenous wisdom with modern physics and neuroscience.

I also have a long time interest in this area. One of the things that sparked my relationship with Master Keating is how he has woven his discoveries drawn from indigenous wisdom and neuroscience into knife fighting training, especially the art of Bowie Knife. Jim is an acknowledged master of the big blade (and other sizes and supporting arts) from the pioneer generation that included Hock Hocheim, Paul Vunak, Kelly Worden, Bob Kaspar, Tom Sotis and others. I’ve found that the training metaphors embedded in advanced knife training provide an excellent platform for installing the cognitive/neurological foundation for skills that must work under stress. Many of the people I’ve trained are involved in military or law enforcement venues. Providing a viable alternative to live fire gun work that translates to improved performance with live fire gun work is useful in today’s limited resources and Covid restrictions.

The excellent journalist (and Amazon show runner of TOM CLANCY’S JACK RYAN series) Annie Jacobsen turned her attention to the closely held anomalous cognition research the US conducts in her book PHENOMENON: 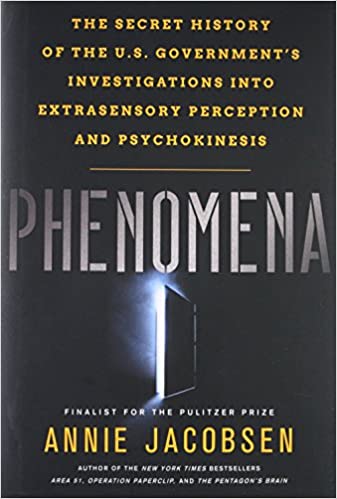 Ms. Jacobsen also touches on the USGOV programs in her excellent books THE PENTAGON’S BRAIN, which examines the inside workings and closely held secrets of DARPA, the Defense Advanced Research and Projects Administration, where I’ve spent some time. She was also granted unprecedented access and clearance in her examination of the USGOV targeted assassination program SURPRISE, KILL, VANISH which focused on the capabilities of the units tasked with those missions.

The USGOV takes anomalous cognition seriously, as do Russia, China, and a number of other countries. Many (most) neuroscience researchers, especially if they take .gov money, tend to pooh pooh it.  Here’s some interesting research sites if you have an open mind:

← Prev: Thought For The Day Next: Neural-Based Training Book One: Retrospectives →