How To Train An Army 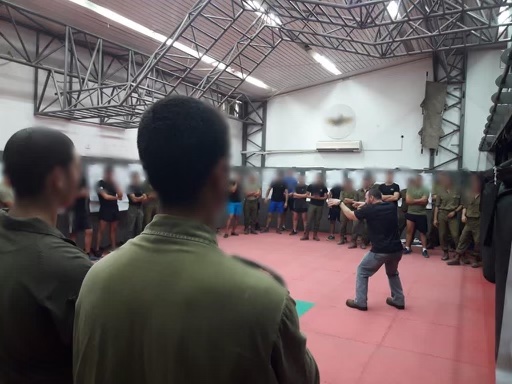 In a previous post HERE I introduced readers to Clint Oosthuizen of the South African Police Service. Clint is one of the handful of neural-based instructors I’ve trained.  I’d like to introduce another one here, “S”. Every single one of the advanced instructors I’ve trained is still active in some function most often in Tier One units or other sensitive positions.  Here’s his bio:

“S” is an Active Reservist in the Israeli Defense Force. His duties have included Swimming Coach, Performance Enhancement Coach, Knife Combatives Instructor and Krav Maga Instructor. He worked for the IDF Naval Commandos, the Israeli SEAL unit, and also trains other Special Operations units within the small IDF-SOF community in performance enhancement, mental/soft skills, knife and empty hand combatives. Other training responsibilities include training instructors for the mandatory IDF Basic Training (Israel has universal conscription). He has a MA in Exercise and Sports Psychology. He is an internationally ranked instructor in the Filipino Combat Systems (FCS Kali).

Among the personal attributes that contribute to his excellence as an instructor are:

He continues to improve his knowledge, skills and abilities as an instructor through continuous education via reading widely, as well as consultation, coaching and mentorship from his instructors.

“S” recently did a prototype training for the Israeli Defense Force under the guidance of “D” the Head Krav Maga Chief Instructor for the IDF. “D” is also a former student of mine, a brilliant instructor and fearsome fighter, pro-boxer and extreme athlete, and IDF SOF veteran.  Like many of his peers, he is deceptive in appearance, with a slim build that hides a wiry frame capable of amazing violence. His gentle, easy going demeanor completely masks his capability and experience.

These two collaborated on reconfiguring the IDF Krav Maga Instructor Program. The resulting case study is an excellent example of how properly trained designer-instructors can immediately implement within the guidelines of an existing training program neural-based training principles that result in IMMEDIATE and DRAMATIC improvement in time management, instruction, and student performance.

← Prev: Neural-Based Training Book One: Retrospectives Next: All Human Traffickers Must Die, or The Backstory of THE REVENGERS Series →