REPOST: (FROM 2012) The Evolution of Mindset Training, Part 1 — Some Random History

I first wrote this series back in 2012.  It was more for my purposes and some of my students and colleagues, but maybe there’s still interest in it yet.  Most of the material remains valid except for the references to the DARPA programs which have since moved on (I beat their old training goal of 50% reduction significantly by clocking in a 85% reduction in specific training programs, but bragging is unseemly.)

It’s interesting for me to watch the evolution in mental aspects training in combative applications. When I started researching and developing ways to inculcate mental training into combative training in the 80s, the only people (officially) involved in that were the folks parodied in the movie THE MEN WHO STARE AT GOATS. Ronson’s book of the same name, in my opinion, was one of the best pieces of disinformation ever put out about a sensitive training program, but it does make for amusing reading.

For better historical information, check out http://www.amazon.com/Search-Warrior-Spirit-Fourth-Disciplines/dp/1583942025. Heckler-Strozzi does an excellent job of documenting the early evolution of the training. One of the students he trained in this particular project (again, parodied in THE MEN WHO STARE AT GOATS) won a Medal of Honor. Jim Channon, immortalized by Jeff Bridges in the movie, was a LTC tasked with developing mental aspects training in the 70s. A good overview of what he did is here: http://ejmas.com/jnc/jncart_channon_0200.htm.

As you may imagine, the “New Age” flavor of the mental techniques examined (which included bio feedback, meditation, active visualization, etc — remember this, we’ll come back to it) put off a lot of people. The level of distaste, dislike and distrust for the “touchy-feely” approach was reflected officially in a generally sweeping condemnation of the 70s and 80s era programs, captured specifically by a dismissive overview conducted by the National Research Council report drafted in the 80s and published in 1990 here: http://www.nap.edu/catalog.php?record_id=1580

As a counter-point to the criticisms leveled by the NRC in the Enhancing Human Performance report, COL John Alexander, Major Richard Groller and Janet Morris wrote and published a book titled THE WARRIOR’S EDGE (not to be confused with a book by a trainer who adopted part of the title for his book after I pointed out this particular reference to him). THE WARRIOR’S EDGE is out of print but still available here: http://www.amazon.com/The-Warriors-Edge-Front-Line-Battlefield/dp/0380716747/ref=dp_ob_title_bk.

MAJ Groller also published an article in the handgun press (JPEG below) which was the first detailed examination, naming names and giving statistics, of the JEDI PROJECT focused on enhancing combat marksmanship.

I was at the time involved in developing training for Air Marshals and other people at the former FLETC facility at Marana, AZ, which also hosted, at the time, a number of other government organizations involved in counter-terrorism.

I was part of an informal working group that included people like Bob Taubert http://www.amazon.com/Rattenkrieg-Science-Quarters-Battle-Pistol/dp/0977265943 who was at the time with the FBI SOAR Unit, Ed Lovette http://www.amazon.com/Defensive-Living-Preserving-Personal-Awareness/dp/1932777091/ref=sr_1_1?s=books&ie=UTF8&qid=1355681350&sr=1-1&keywords=defensive+living who was, at that time, conducting training for a government agency involved in counter-terrorism, Dave Spaulding http://www.amazon.com/Handgun-Combatives-second-Text-Only/dp/B004RTMXY6/ref=sr_1_2?s=books&ie=UTF8&qid=1355681403&sr=1-2&keywords=handgun+combatives+2nd+edition and a number of other notables in training. I was fortunate to have an extensive roster of cutting edge mentors and contacts, derived from my employment as a protection specialist and trainer with Lofty Wiseman and Dennis Martin’s CQB Services operation: 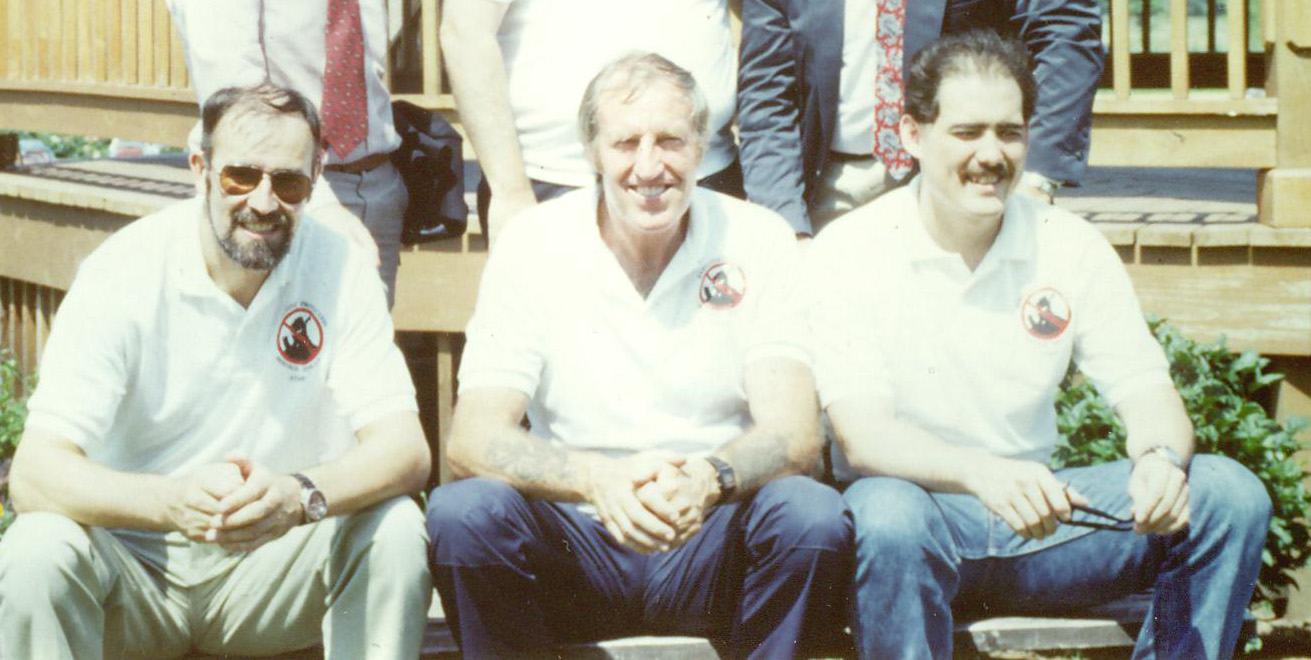 While at FLETC, I had access to a facility and a cadre of role players, and I was fortunate enough to be given a free hand in designing certain aspects of training. I had the opportunity to experiment with and then implement some of the early concepts that evolved into “neural-based training” — incorporating elements of accelerated learning, cognitive strategy mapping, expert skill set transfer to novice learners, etc. — on multiple groups of students. And I didn’t have to have an approved Human Use Protocol.

I shared my results freely with the other members of our “working group” and got plenty of feedback from the guys who were out doing the deed in the late 80s and early 90s. After I left federal service in 1993, I continued the work and shared the information as I found it. I found excellent testbeds for the concepts (relative to unarmed combat) in the martial arts and “front door security” world of the United Kingdom, where security professionals regularly engage in full on unarmed combat against armed or unarmed (and skilled) opponents; my testbed for armed combat was in South Africa, where I was invited by the South African Police Service to present material to their frontline operators in what was, at the time, the most violent urban area in the world. The SAPS incorporated it into a module titled MENTAL CONDITIONING FOR CLOSE COMBAT, required for all National Police officers in the mid 90’s.

Meanwhile, back in CONUS, “mental training” was relegated to lectures on mindset, many of them growing from COL Cooper’s original Gunsite lecture on mindset http://www.amazon.com/Principles-Personal-Defense-Jeff-Cooper/dp/1581604955 which influenced and continues to influence multiple generations of combative instructors. As it should. But talking about mindset is not the same thing as training it.

I started publishing in 94-95 a series of articles, primarily in COMBAT HANDGUNS, SWAT, GUNS AND WEAPONS FOR LAW ENFORCEMENT (some of them archived on this blog) focusing on sharing with a larger audience some of my findings. These included introductions to the OODA Loop, situational awareness as an attribute, and training that focused on installing and enhancing the mental platform for combat. There’s some good overviews archived here: http://www.kalijkd-u.com/dev/kjkdu_articles.php?aid=1&title=Marcus+Wynne:+The+Way+of+the+Jedi However, writing about mindset is not the same thing as training it.

I was laughed at quite a bit and denounced for “New Age” bullshit. One notable, at the time, trainer made a point of denouncing “so-called accelerated learning” in his popular book; I notice that in subsequent editions he’s deleted that. Perhaps after these folks started focusing major effort on that “so-called accelerated learning: http://www.darpa.mil/Our_Work/DSO/Programs/Accelerated_Learning.aspx

I just plowed ahead and continued to do my thing. I measure my success by the number of lives saved by people I’ve trained all over the world.

Lives saved, dudes and dudettes. That’s what it’s all about.

So fast forward to the second decade of the 21st century and what do I see? I’m so far outside the tactical community I may as well be Obi Wan out in the desert, but I do see a return by cutting edge trainers to the essential foundation of the warrior’s skill set — mindset and mental attributes. I also see that technology and research is catching up with the work that was done back in the 70s, 80s, and 90s.

Here’s where the cutting edge research is today: (these are out of date, go look at www.darpa.mil for new stuff)

Everything Old Is New Again.

The Article That Started It All — 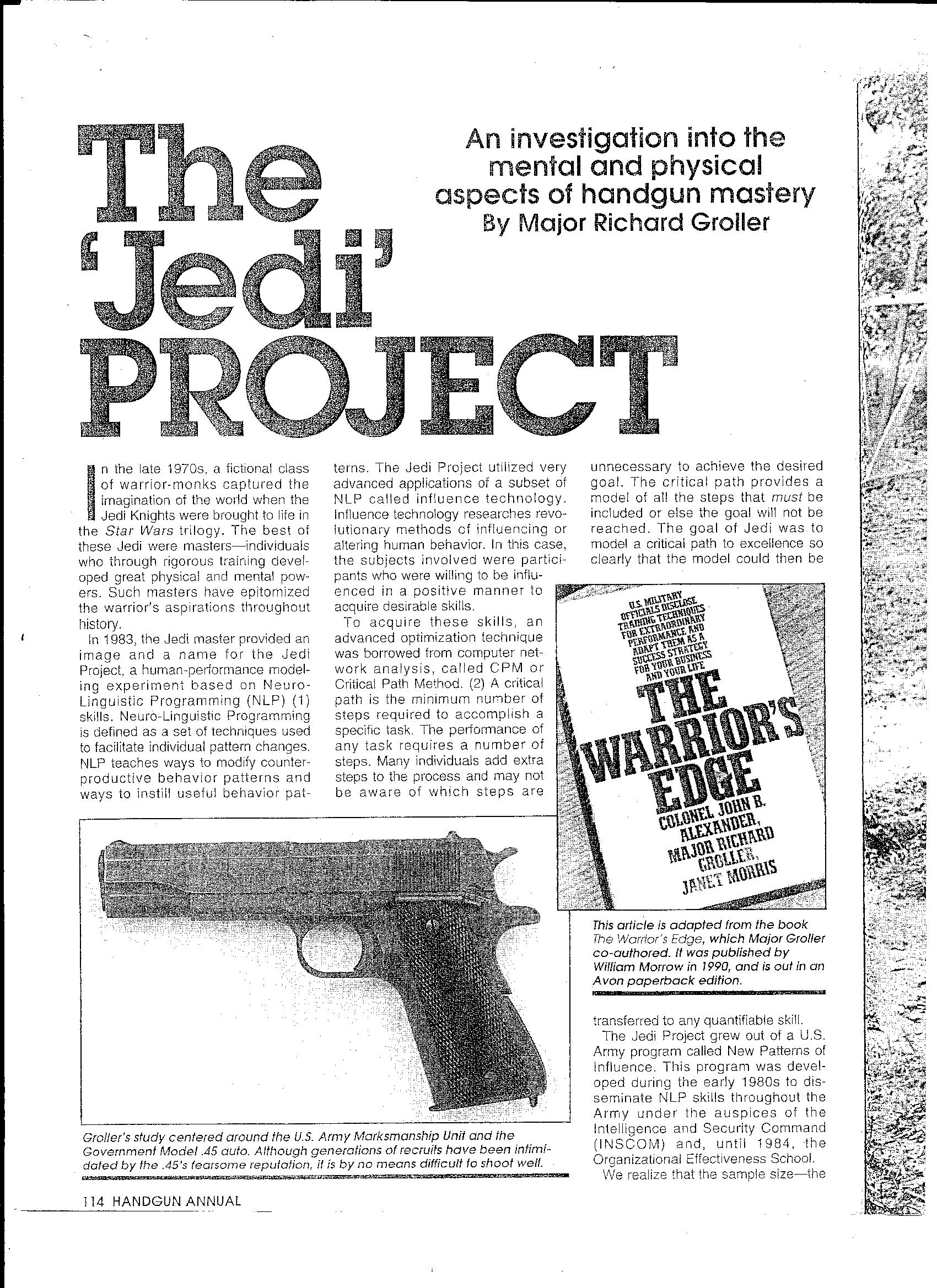 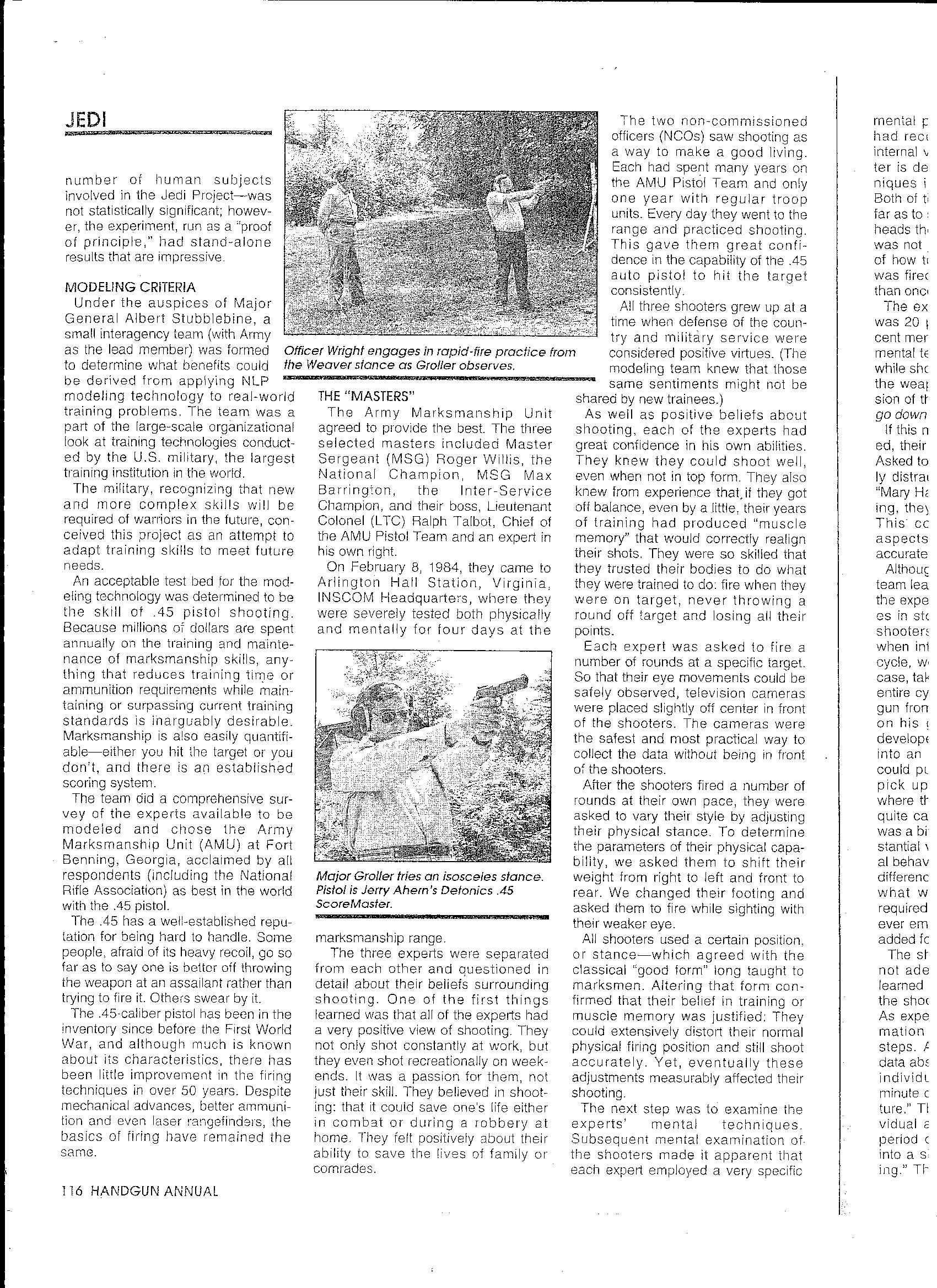 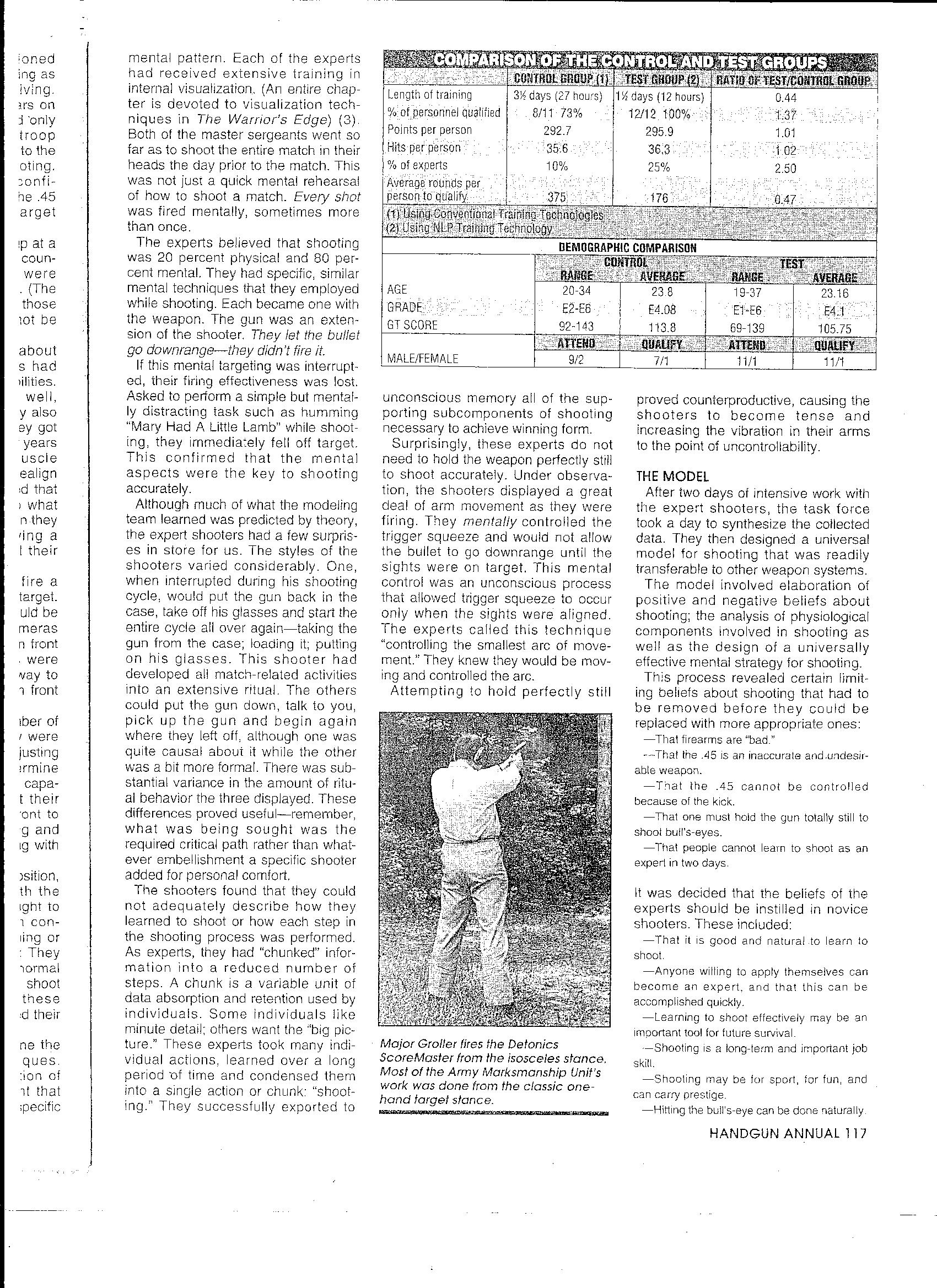 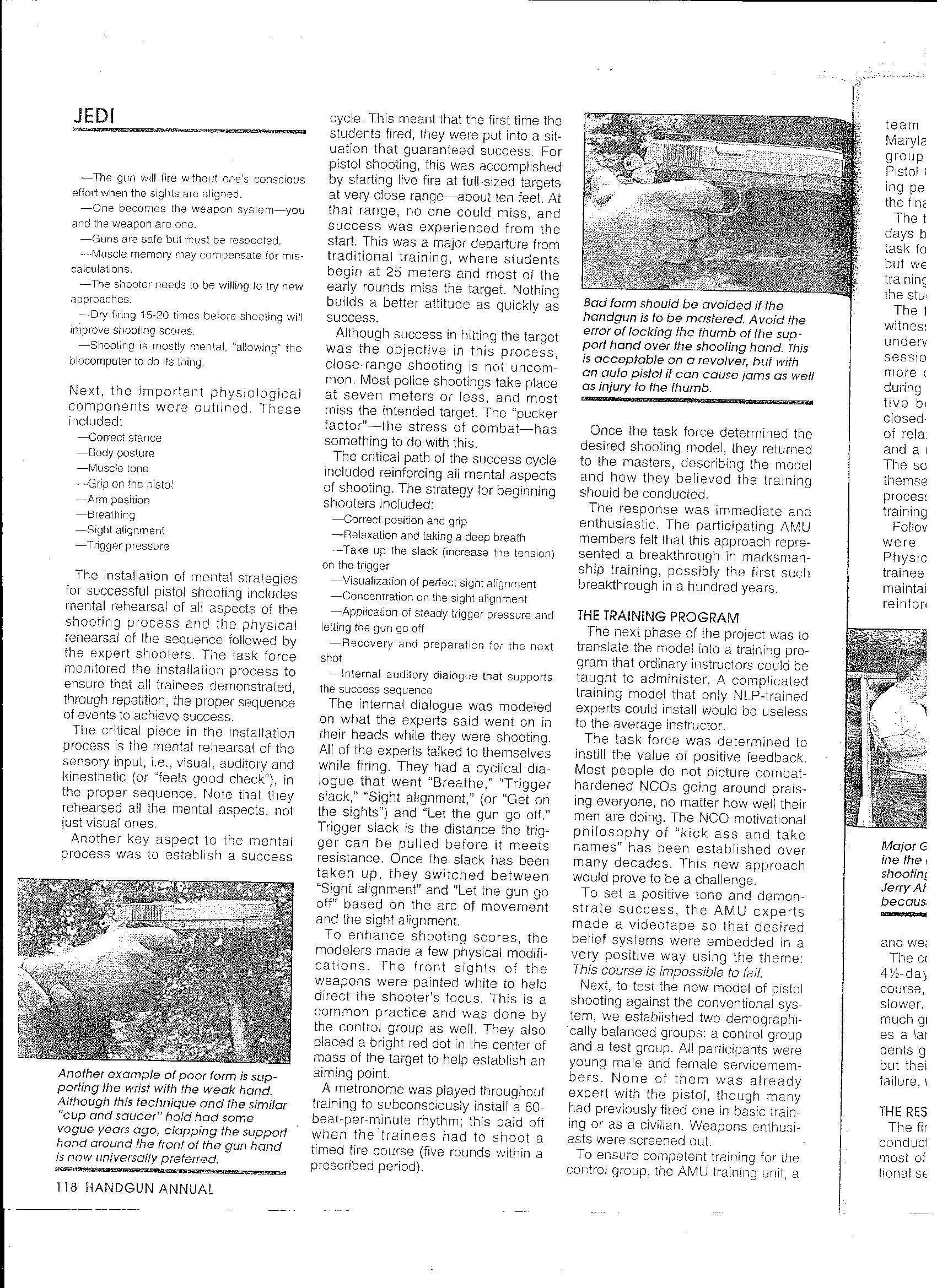 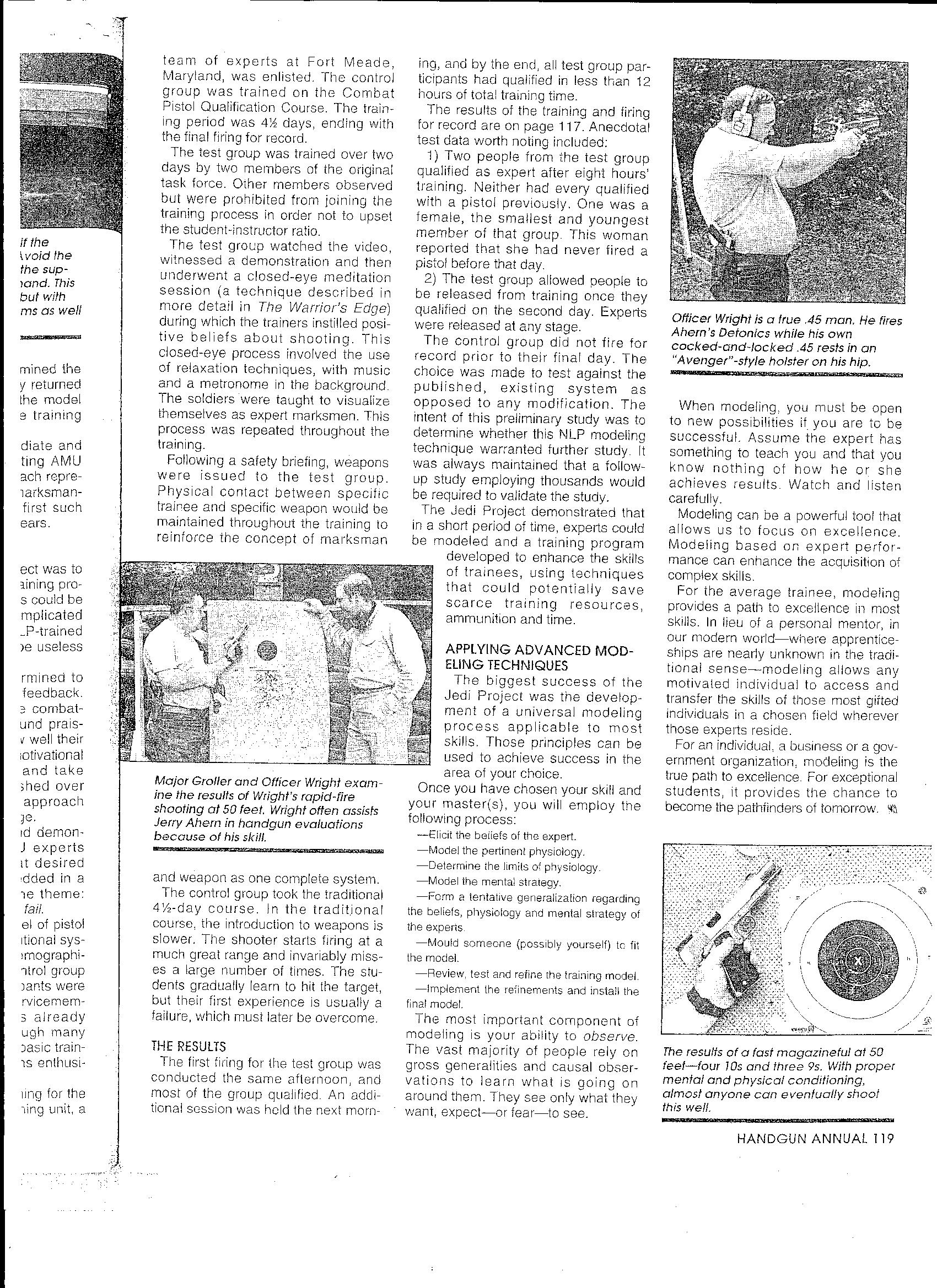 ← Prev: From A New Novel In Progress... Next: REPOST FROM 2012-ish: Mindset Rambles Pt 6; The Other Guys Assimilating mental training... →